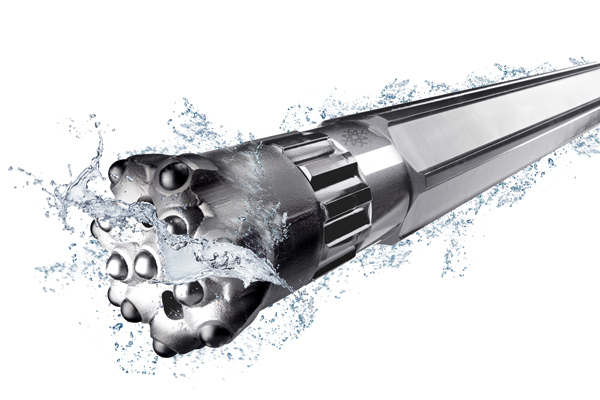 The water-powered drilling technology is today often more optimal and economical than other drilling technologies. In addition, it has lower energy consumption and significantly lower impact on the environment.

For the Swedish mining company LKAB, the technology means that their blast holes in the production now are twice as long and each blast provides eight times more ore. 20 years of using this technology has helped LKAB to be a world leader in its market.

Now it’s time to offer the rest of the world the same opportunity. 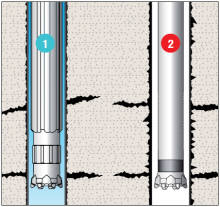 How did this happen?
The Swedish mining company LKAB is a world leading producer of processed iron ore products for steelmaking, and a growing supplier of mineral products for other industrial sectors.

In the 80s, LKAB were up for a great challenge, scaling up their production. To achieve their high goals, the company needed more efficient mining, reducing production costs dramatically. The blast holes needed to be drilled longer and much straighter. Intensive development began and one solution to the problem was to use water as power transmission.

From air to water
To power the DTH (Down The Hole) hammer, LKAB used, as broadly throughout the mining industry, air. This is not a completely optimal drilling technology, but it was available back then. LKAB wanted to increase the precision as the technology back then gave limited blast hole depth.

Longer and straighter blast holes would give more iron ore per blast, an important part of lowering the production cost. In addition, the work environment needed improvement by minimizing oil mist and dust in the air. This had been a problem for a long time.

The new technology meant using water instead of air for both powering and lubrication of the equipment. The new water-powered drilling technology proved to be able to drill both straighter and deeper into the ore body. Today LKAB has increased their blast hole depth to 56 meters, compared to the previous 28 meters.

Founded 1988
In 1988, LKAB was one of the founders of the company G-Drill. It would continue to drive the development of the water-powered drilling technology. The aim was also to find other industries where the water-powered drilling technology would make the same benefit as it did for LKAB. In 2002, the subsidiary changed its name to Wassara and in 2012 it upgraded to LKAB Wassara. The goals are still the same.

In recent years, Wassara has been building an organization designated to handle the market demand from new areas such as ground engineering, dams and exploration drilling.

– We now have the technology, resources and references to achieve success outside the mining industry say Kent Boström, Communications Manager at Wassara. We look forward with confidence at 2013 as the start of something big. We can now show several examples of demanding applications where the water-powered drilling has been superior to other drilling technologies.

The heart of the system is its worldwide patented Wassara DTH Hammer (Down-The-Hole), using water for power transmission. The drilling technology is suitable for most applications, particularly in applications which are difficult or unsuitable to drill in with other drilling technologies.

The water-powered technology’s all features
Using water is optimal as it cannot be compressed. The amount of water leaving the hammer is the same as has been fed to the system. The minimal pressure loss means that the power is unchanged no matter how far one is drilling. This means that the drilling efficiency is equally high regardless of whether the bore is 10, 100 or 1 000 meters.

Using water for power transmission also means that the power fully reaches the hammer, enabling drilling in smaller borehole dimensions. Today, the water-powered drilling technology can be used for drilling holes with diameters from 65 to 254 mm.

– To power the same size of an air-powered DTH hammer for one minute, 24 000 litres of air (400 litres each second), compressed to 30 bar, is required, says Kent Boström. When leaving the drill bit, the air wants to expand back to its original volume, 720 000 litres.

The air will then gain a speed of 40-80 meters per second in the borehole. The risk of blocking in the borehole varies with the formation, but a blocked borehole will quickly lead to a large volume of air, trying to find an alternative escaping route.

When drilling in urban areas, buildings and other constructions will be at risk if the formation gets pressurized. Today, water-powered drilling is prescribed in many urban and residential areas.

The precision was also important for LKAB when the technology was developed. Details such as water and hammer shape makes it possible to drill straight and with high precision. Several tests indicate that the deviation of a borehole is around 1-2 percent in a 200-meter borehole, to be compared with deviation of about 15-20 percent when drill with air-powered technology.

When drilling with Wassara water-powered technology, no oil is required for lubrication of the equipment. This also means that there will be no introduction of oil to the borehole that can harm the environment.

In addition, both power consumption and CO2 emissions are significantly lower than when compressed air is used as the power source:

The technology developed by LKAB in the 80’s is now showcasing a number of areas where it is both more efficient and more economical than traditional drilling technologies where compressed air is used. In addition, it has lower energy consumption and significantly lower impact on the environment.

APPRECIATION FOR THE PARTNERSHIP WITH OFFICE OF THE PRESIDENT

On behalf of Office of The President, we would like to thank you for the sacrifice you have made by[...]

Goodbye daddy, you will always be in our hearts You were the grace that placed itself in the lives [...]

We are proud to announce the launch of our newly  designed website. On behalf of all of us here at i[...]